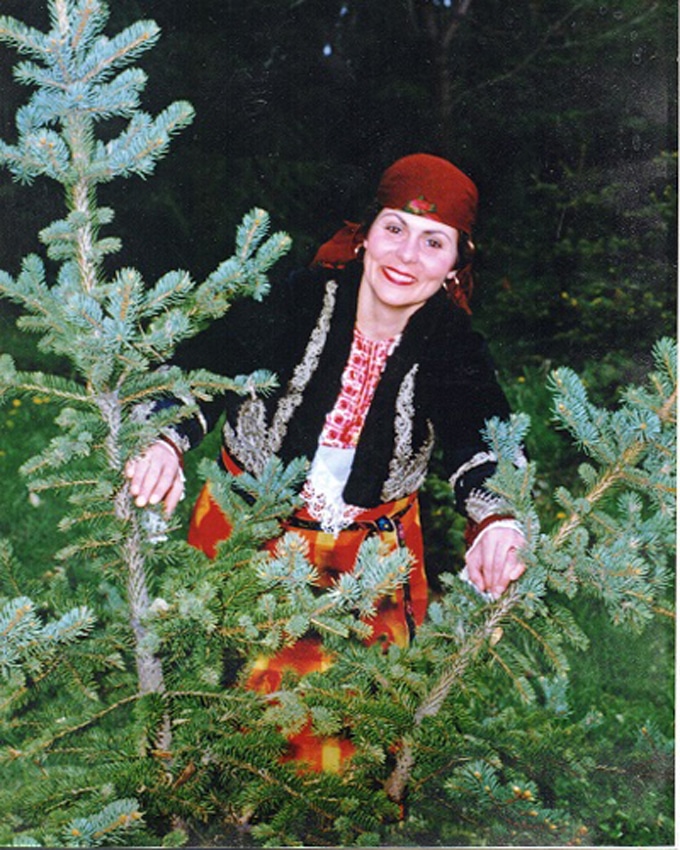 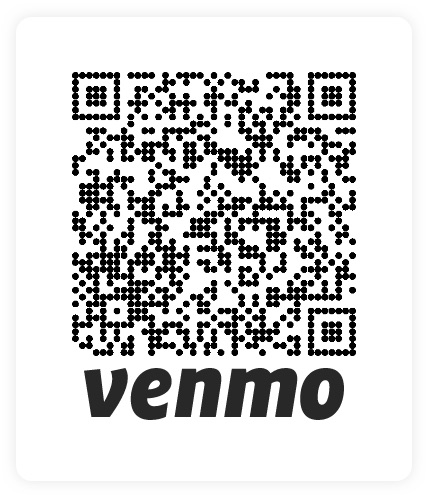 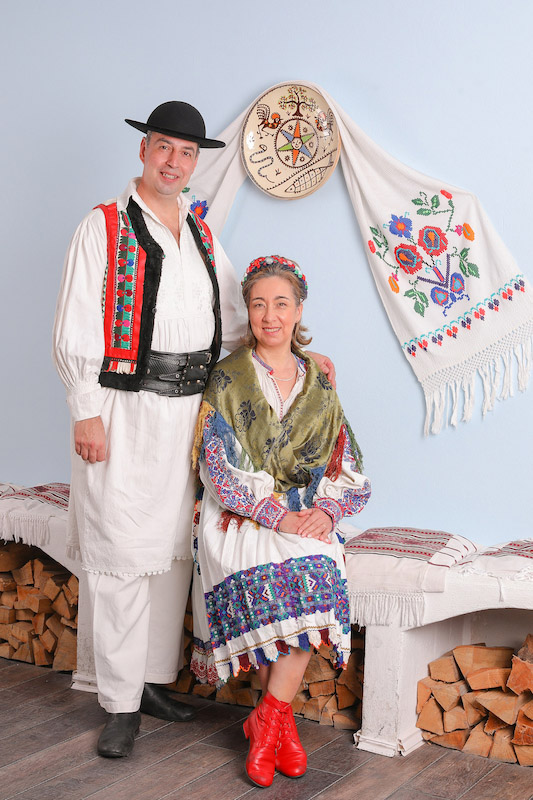 Sonia Dion and Cristian Florescu (soniacristian.net) are known for their vibrant energy, warmth and exciting choice of dances and music. Cristian Florescu was born in Bucharest, Romania. He started dancing in 1982 with different Romanian folk ensembles and studied with various specialists, including Theodor Vasilescu. Cristian was principal dancer with the National Ensemble Cununa Carpatilor. In 1990-91, he received his certificate as a recognized solo dancer and choreographer in the field of folklore from the Romanian Ministry of Culture and the ACAFR. In 1993, he joined Les Sortilèges, a professional folk dance company based in Montreal Canada, where he has danced, taught and choreographed. During his time in Canada, Cristian has acquired multiple skills in various dance forms, including modern dance, ballroom, jazz and tap, as well as French-Canadian and Irish step dancing. Sonia Dion was born in Quebec and has been a professional dancer for over 20 years. She was lead dancer, choreographer and artistic director, among other roles for Les Sortilèges dance company; Canada's oldest professional folk dance ensemble, with whom she developed several new productions. Sonia has toured worldwide and has been exposed to a wide range of dance techniques, including Romanian folk dance, Scottish Highland dancing, French-Canadian step dance and ballroom dance. It was at Les Sortilèges that the two met and formed a professional and personal partnership. They have taught at l'École supérieure de danse du Québec, and have been part of the Artists in the Schools program sponsored by the Quebec Ministry of Education. In recent years, Cristian and Sonia have developed a specific interest in working with recreational folk dance groups. They've been teaching in Brazil, Canada and the United States, Europe (Austria, Belgium, England, Germany, Italy, Norway, Switzerland and the Netherlands), Asia (Hong Kong, Japan, Singapore and Taiwan) to share their love of Romanian folk traditions. They have taught workshops in Canada and the United States and choreographed Romanian suites for performing groups, including the world-renowned BYU Folk Dance Ensemble in Utah. Email them to purchase music for their dances: sonia_dion@hotmail.com 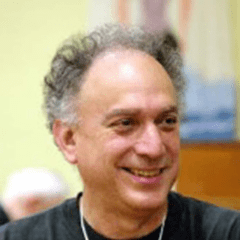 Michael Ginsburg has been director and lead trumpet player of Zlatne Uste Balkan Brass Band since 1983. He accompanied ZU to brass festivals in Guča, Serbia, three times between 1987 and 1990, as well as in 2003 and 2005, where he and ZU were able to play and party with local brass bands and experience the music in its natural setting. Michael and Zlatne Uste worked with Ekrem Sajdić and Zlatni Prsti brass band in 2003, and in 2005 with Vranjski Biseri, both in Vranjska Banja, Serbia. Michael performed in the summer of 2010 with Zlatne Uste at the first competition of international bands at the Sabor Trubača in Guča, Serbia, representing the United States. ​For many years, Michael has been interested in Balkan music and dances, especially Macedonian and Serbian. He is an expert in the complicated rhythms of Balkan music and has made several research trips to Bulgaria and the former Yugoslavia, and studied in Macedonia with Pece Atanasovski, with whom he made research tours of the country. Michael has been on the teaching staff of the Macedonian Pearl seminar in Berovo, Macedonia. Michael lives in Yonkers, NY. For Michael's dance music, email him at mginsburg@gmail.com
for electronic copy of music, for a CD with the music, paid directly to him. 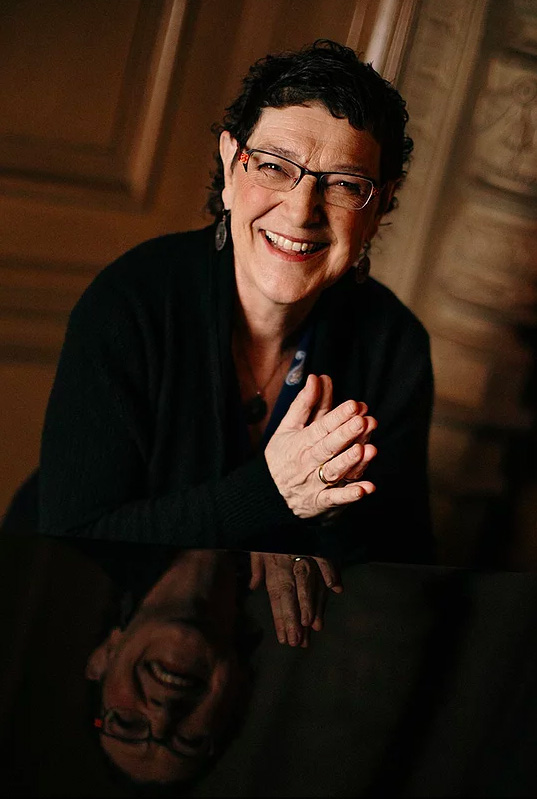 Michele Simon (michelesimonsimplyvoice.com) has been involved with music all of her life, and with Balkan folk music for most of it, as a dancer, singer, drummer and teacher. She was raised surrounded by music of all kinds, including classical (especially Bach), standards (especially Margaret Whiting, Frank Sinatra, and Ella Fitzgerald), and American folk music. She sang before she talked, played cello and guitar, and most formatively, enjoyed trading harmonies with her mother’s rich alto.She has been inspired by countless musicians, both in the U.S. and abroad, and has been lucky to study with, to name just a few, the late Nadezhda Hvoineva, from the Bulgarian Rhodope region; the late Esma Redžepova, Queen of Romany music; Serbian folk specialist Svetlana Spajić; Mary Sherhart of Seattle; Jane Sharp of Berkeley; and Bulgarian master singer Tatiana Sarbinska, with whom she also trained as a teacher. Over the last thirty years she has sung with Kitka Women’s Vocal Ensemble; and has been steeped in complex odd-metered Balkan dance rhythms through singing and playing percussion in the folk dance bands Anoush, Brass Menažeri, Helladelics and Zabava! She has appeared on recordings and stages across America and in Bulgaria, as well as on Bulgarian and Serbian TV.Michele teaches private students, workshops, and camps, including the popular Balkan Vocal Technique class that has been a staple at Mendocino Balkan Camp for almost 20 years. As a singing teacher, Michele’s specialty is integrating Balkan vocal styles with American voices. With humor, warmth and patience, she focuses on placement and sound fundamentals, using innovative exercises and imagery, as well as her model skull, Bartholomew. Michele lives in Oakland, CA.
to top
X
Croatian American Cultural Center, 60 Onondaga Ave, San Francisco, CA 94112